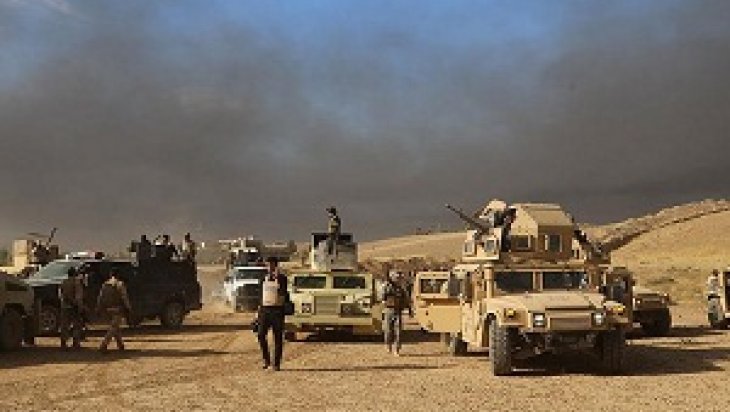 Shiite militia al-Hashd al-Shaabi de facto seized control in the field in terms of fight against DAESH even though it was established as reinforcement to Iraqi security forces.

Having emerged during the post-2003 re-structuring process in Iraq, Shiite militia sometimes posed a threat to the state government and reappeared after DAESH took control in large part of Iraq in 2014. It became one of the major debate issues after Mosul operation was launched.

The analysis which will be made in order to better understand the political and social dimensions of these groups united under the name of al-Hashd al-Shaabi and take into account their roles in the Mosul operation and the aftermath is of critical importance in terms of evaluations regarding Iraq’s future.

Iraqi army and security forces remained inefficient when DAESH conducted its actions and seized large part of Iraq in June 2014 and the advance of the organization could not be stopped, which triggered a security crisis in the country. After DAESH headed towards the regions, notably Samarra, where Shiite holy places are found, Iraq’s most influential Shiite cleric Ayatollah Ali al-Sistani called for “jihad” and invited all Shiite and Iraqi people to fight DAESH. Upon this call, thousands of Iraqi Shiites formed “al-Hashd al-Shaabi” structure also known as “Voluntary Units” under the leadership of the militia. Al-Hashd al-Shaabi was later perceived as the pioneering driving actor in the fight against DAESH and de facto seized control in the field in terms of fight against DAESH even though it was established as reinforcement to Iraqi security forces.

However, Iranian commanders and soldiers, notably Qasem Soleimani, commander of the Quds Force of the Army of the Guardians of the Islamic Revolution took part in the operations against DAESH, which raised doubts regarding the political process in Iraq, Iran’s influence and the goals and objectives of al-Hashd al-Shaabi. Especially the number of militia in al-Hashd al-Shaabi increased, they took an efficient position not only in the military but also in administrative terms in the regions under their control and their practices were sometimes witnessed in Sunni Arab regions where some groups in al-Hashd al-Shaabi entered, which turned it into a controversial structure.

As of the current situation, more than 55 Shiite militias are active in Iraq. The most influential and relatively large groups among them are Badr Organization, Asa’ib Ahl al-Haq, Kata’ib Hezbollah, Saraya al-Khorasani, Saraya al Salam, Abu al-Fadl al-Abbas and Kata'ib Sayyid al-Shuhada. These groups play an active role in almost every region in Iraq and pioneer the other groups in al-Hashd al-Shaabi. These groups existed in Iraq before the fatwa of Ayatollah Ali al-Sistani and conducted activities in Iraq in the post-2003 period. Some of them froze their activities or carried them into the political arena while some others were formed after these groups ended their activities. Furthermore, certain Iraqi Shiite militia which is said to have been formed in order to protect the Shiite holy places in Syria and support al-Assad regime is also involved in al-Hashd al-Shaabi structure. Apart from these groups, new militia also emerged after the fatwa of al-Sistani but most of them follow Iranian religious leader Ali Khamenei as an authority.

In addition to the efforts to allow al-Hashd al-Shaabi to gain an institutional status and to joint it to the state structure, it is also indicated that the members of some militia groups which fight DAESH will be appointed as soldiers and policemen under the Ministry of Interiors or the Ministry of Defense in the post-DAESH period. However, there is no legislative work for the time being in this matter or this has not yet been officially announced. Moreover, it is also planned to integrate the members of al-Hashd al-Shaabi into the National Guard which will be formed from among the people of each province and will be responsible for the protection of the provinces in the following process. Indeed, the bill of law drafted as regards the National Guard also called “Haras al-Watani” was submitted to the Iraqi Parliament.

The re-emergence of the militia in Iraq weakens the legitimacy of Iraqi government. The attempts of the government to ensure security with a structure formed by the militia instead of creating a balanced structure which will lead the state to stability by strengthening the security forces like the military and police pose obstacles before the institutionalization of the state. On the other hand, each group acts under their own flag and the directive of their own leaders in the field even though the militia groups seem to fight DAESH under al-Hashd al-Shaabi, an organized and integrative structure. It is possible to say that it is not easy at all to control this structure which comprises of more than 55 militia groups even though Iraqi government express such a will in this direction.

Another issue which deepens the threat of al-Hashd al-Shaabi to the authority of the central government is that these groups are supported by Iran in terms of munition and logistics. Neither Iranian nor Iraqi authorities hide this reality any longer. Therefore, al-Hashd al-Shaabi which increasingly loses its credibility is perceived as a force directly under Iranian control. Many Iraqi people even believe that Iran supports al-Hashd al-Shaabi in order to protect its own interests and uses the Iraqi again in line with its own interests. Even though there has not yet been any reaction on social and mass level, some groups in al-Hashd al-Shaabi are involved in serious human rights violations and crimes. This even draws the reaction of the Shiite population.

As of the current situation, it is known that these groups which conduct uncontrolled acts and govern the regions under their control oppress the local population. Such that the involvement of some groups in al-Hashd al-Shaabi in crimes like theft, seizure, kidnapping, racketeering etc. drawn the reactions of Iraqi Shiite religious leaders and Ayatollah al-Sistani released a fatwa indicating that such acts of the militia towards civilians could not be excused.

Influence of al-Hashd al-Shaabi in the reaction regarding Bashiqa

Although these militia groups could be integrated into Iraqi security forces after the elimination of DAESH threat, it is possible that these forces will maintain their commitment and motivation in ideological and political terms. It seems possible that these groups will demand for administrative share in the regions where they are dominant or influential even though these groups do not take part in the government. In this case, the central government the authority of which will be weakened may turn out to be a loose structure. Furthermore, the possibility of retaliation and struggle for control in Iraqi state structure strongly shows itself.

Although al-Hashd al-Shaabi does not officially take part in the operations, the participation of its affiliates in the operation under the Iraqi army or al-Hashd al-Asha’ri and the developments which may be made during this process will both aggravate the fight against DAESH and disturb the political and social balance in Mosul in post-DAESH period. Indeed, Qais al-Khazali, the leader of Asa’ib Ahl al-Haq which is one of the main groups under al-Hashd al-Shaabi, stated that “Mosul operation would be the revenge of Husayn ibn Ali.” This shows that the sectarian approach of al-Hashd al-Shaabi raises concerns about the future of Mosul and Iraq. Indeed, the operation in Ramadi, which was initially reclaimed from DAESH and was subject to a substantial change in terms of its demographic structure (large population of Sunni Arabs) was also launched with the code name “Lebbeyk Husayn” (We are at Husayn’s command).

Al-Hashd al-Shaabi performed a sectarian approach in this process. This factor will further increase the sectarian-based tension in the country. The sectarian-based tension will instigate radicalization in Iraq. These radicalized factors will increase the conflict dynamics and the conflicts will deepen the segregation in Iraq. This situation also leads to regional conflict risks. Indeed, Iraqi Shiite militia fights both DAESH and the opposition in Syria in order to support the Assad regime. The spread of the conflict through the Mosul operation and the instigation for sectarian fight also in Syria may pit those who take opposing positions in the Syrian war against each other. This situation may cause an increase in the tension between the countries in the region.

Therefore, it is of vital importance for both Iraq and the future of the region to adopt a balanced attitude instead of a sectarian approach in the Mosul operation and the fight against DAESH, to take a position which will end terrorism and to develop cooperative dynamics against terrorism.