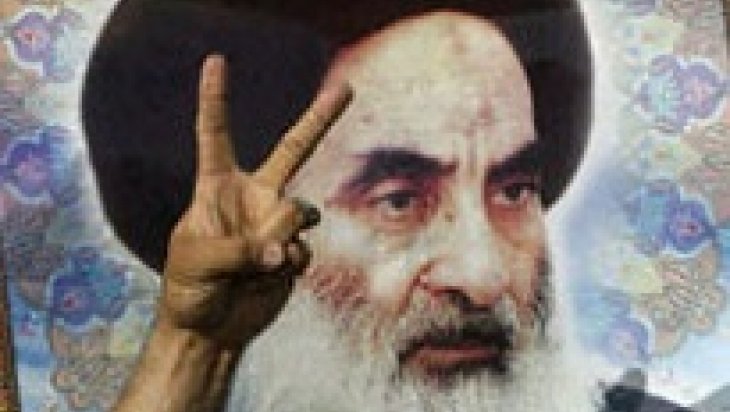 The statements and Friday khutbas of religious leaders that have become the main dynamics of Iraqi politics since 2003 determines now the direction of the politics. With the Shiite becoming the primary actor in Iraqi politics after 2003, religious functionaries who were the determining characteristic of Shiism came to the forefront in such processes as solving the political crisis in Iraq, providing support for elections and forming government. At this point, it would be correct to say that Ayatollah Ali Al-Sistani, the highest Shiite authority in Iraq, is distinctly influential in Iraqi politics. In this sense, it is seen that Ayatollah Ali Al-Sistani comes to the forefront as the “common sense of Iraqi identity”, as a figure who emphasizes Iraqi identity in social and public spheres. Indeed, Ayatollah Ali Al-Sistani called all Iraqis and Muslims to fight against ISIS in his “jihad” fatwa that he gave after ISIS gained control over some regions in Iraq in June 2014. Thousands of Shiites formed voluntary troops in order to take part in the fight against ISIS. These voluntary fighters waged war against ISIS under the name of al-Hashd al-Shaabi together with newly-formed militia as well as the existing Shiite militia. In around 1,5 year after the beginning of fight against ISIS, this organization became both the executive power of this fight and an important actor in Iraqi politics.

The public demonstrations which initially started in order to protest electric cut-outs in Iraq in the summer of 2015 transformed into protests against corruption and lack of service within the government and largely spread across Iraq. This increased the pressure on Al-Abadi government. In this process, Ayatollah Ali Al-Sistani again made a statement in August 2015 and encouraged Al-Abadi to especially react to corruption in the government with “iron fist” and to make reforms in judicial system. Immediately after the statement of Al-Sistani, Al-Abadi introduced a reform package about the government which also included cancellation of president and vice-prime minister positions. Despite this, Iraqi Parliament decided that the prime minister of Iraq did not have the authority to cancel such positions and withdrew its support for the decision of Al-Abadi because of the jars about the reforms in Iraqi politics. However, it was still believed that there was a need for reforms. On the other hand, Ayatollah Ali Al-Sistani insistently gave messages almost each Friday to Al-Abadi, encouraged him to “continue his fight against corruption and not to be afraid” and stated that “the public and authority were behind him”. This message relieved Al-Abadi and allowed him to make a considerable progress in terms of the fight against ISIS in 2015.

However, Al-Abadi lacked in political power during his term of around one year and tried to stay in power with the support of the religious authority. This caused power vacuum in Iraqi politics. At this point, al-Hashd al-Shaabi and the Shiite militia are actively involved in the politics as well as in the fight against ISIS. In this sense, it is possible to say that Iraq heads towards a militarized political system. Despite this, Ayatollah Ali Al-Sistani clearly supported Haydar Al-Abadi, which allowed for the protection of the government from militarized politics. However, in the khutba that Ahmed As-Safi, representative of Ayatollah Ali Al-Sistani in Karbala, gave in Hussein Mosque on 8 January 2016, he raised doubts about the support of Shiite religious authority for Al-Abadi. In his message, he drew attention to restructuring Iraqi army based on national and military rules so that it can protect all public spheres in the country without discrimination. He also indicated that no concrete step was taken in one year even though calls were made as of last year to punish the names involved in corruption and to ensure social justice within the scope of the fight against corruption. Furthermore, it was indicated that this situation concerning the reforms was firmly deplored and the first critical attitude towards the government was seen. Indeed, the first message which reflects the reaction to Al-Abadi was in November 2015 when Al-Abadi visited Najaf but could not see Ayatollah Ali Al-Sistani. It is seen that implicit action turned into a discourse with the last Friday message. Even though the religious authority did not concretely withdraw its support from Al-Abadi government, its critical attitude towards the government seems to risk the position of Al-Abadi. Indeed, in the statement he made at the 94th foundation anniversary of Iraqi Police, Al-Abadi indicated that 2016 would be the year of the fight against corruption and tried to reassure the religious authority. However, it can be said that it is not possible to end the critical attitude towards Al-Abadi unless Al-Abadi takes any concrete steps in terms of reforms as of this process. Al-Abadi is deprived of full political support and does not act in harmony with al-Hashd al-Shaabi and the militia in the fight against ISIS. This considerably weakens the power of Al-Abadi. At this point, lack of support given by the religious authority to Al-Abadi seems one of the most compelling situations which Al-Abadi government will face in the following period. The steps that Al-Abadi takes will determine both his future and that of Iraq in an environment where the names of the candidates who may replace him went the rounds in September-October 2015.