What does the Kayseri Bazaar burned in Kirkuk mean? 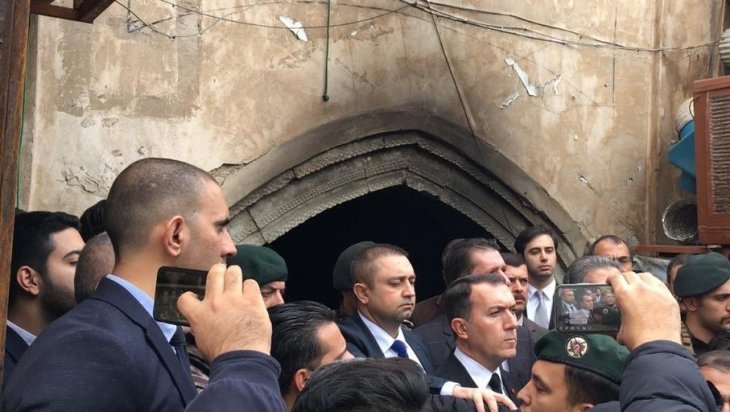 On the night of November 26, 2018, a huge fire broke out in a historical building known as the “Kayseri Bazaar” in Kirkuk. More than 400 stores inside and outside the bazaar have been affected by the fire and serious damage has occurred in the majority of them. Immediately after the incident, Turkish Ambassador to Baghdad Fatih Yıldız urgently went to Kirkuk, investigated the incident on site, and declared that the initiative for renewal of the market was started and even the President Recep Tayyip Erdoğan followed the subject. Therefore, it was emphasized that the issue was pursued by Turkey at the highest level. Indeed, Ambassador Fatih Yıldız visited Kirkuk even before the Iraqi government authorities and revealed the importance of both Kirkuk and “Kayseri Bazaar”. For the bazaar is not only an ordinary shopping center but also one of the most valuable assets of Kirkuk in terms of its historical, social, political and economic aspects.

It is known that the construction of Kayseri Bazaar which is a common trade center of all people living in Kirkuk was completed in 1855 during the Ottoman period. The commercial mobility in the Kayseri Bazaar which is a big commercial center continues with its full speed up to the present day. Furthermore, the biggest reason for calling the bazaar “Kayseri” is that one of the commercial centers in the Ottoman period was Kayseri, and this bazaar was inspired by a closed bazaar in Kayseri, which was built in the 15th century and known as the biggest closed bazaar after the one in Istanbul. What a coincidence is that the fire in the Kayseri Bazaar in Kirkuk revealed another similarity with the Grand Bazaar in Kayseri. Although it was an unfortunate similarity, almost all parts of the bazaar in Kayseri was burned in 1870 and rebuilt later.

Another feature of the Kayseri Bazaar in Kirkuk is that the bazaar structure was set up according to the contemporary rules. 24 corridors (by-streets) were built as there are 24 hours in a day. There are 365 workplaces in the bazaar which reflects the 365 days in a year. Besides, considering that there are 7 days in a week, 7 entrances to the bazaar were built and the doors were arranged in accordance with the sunrise and sunset. On the other hand, 12 chambers were built on the upper floor of the bazaar as there are 12 months in a year. What is more, the bazaar was inspired by 4 seasons of the year. In this sense, it is possible to say that the bazaar was built with an architectural intelligence and has its own characteristics.

On the other hand, it is another characteristic of the bazaar that the Kayseri Bazaar in Kirkuk was built just below the hill where the historical Kirkuk Castle is located. In other words, the Kirkuk Castle is a protector for the Kayseri Bazaar. In addition to the Ottoman Martyrs' Cemetery in the Kirkuk Fortress, the Prophet Daniel Shrine, Mary’s Shrine and the Gök Kümbet (Buğday Hatun Tomb), which was built during the Seljuk period, together with the Kayseri Bazaar, constitute a unity in terms of architecture as well as history and identity. In this regard, all these structures reveal a civilization in Kirkuk. As a matter of fact, statements such as Kirkuk is a miniature of Iraq and Iraq for the Middle East also have a concrete meaning. Ambassador Fatih Yıldız called the Kayseri Bazaar in Kirkuk as “Little Kirkuk” and stressed that the bazaar is a common living center.

This characterization by Ambassador Fatih Yıldız holds many meanings. Kirkuk is an Iraqi province where Turkish identity is embodied in terms of its historical background, but it is a city of reconciliation in which all ethnic and religious identities from Arab to Kurdish, Christian to Muslim. Over time, even though various regimes and different ethnic, religious, ideological and political groups tried to vandalize the identity and order of Kirkuk with the establishment of the modern Iraqi state, the nature of the city rejected this and Kirkuk still stays up. Especially the Turkish presence in Kirkuk has suffered most and had its part from the destructive policies towards Kirkuk; yet, it has managed to preserve its existence to a great extent so far and has reflected its presence upon the city and left a trace. In the historical process, there have been many tragic events which we could not count the names of such as 1924 Levi Massacre, 1946 Gavurbagı Massacre, 1959 Kirkuk Massacre, 1980 hanging of the Turkmen leaders, 1991 Altunkopru Massacre. However, in Kirkuk, the Ottoman Barracks, Ottoman Martyrs Cemetery, Gök Kümbet, Kirkuk Fortress, and historical cemeteries were also targeted with a view to eliminating the Turkish identity over the city.

On the other hand, as a result of Arabization and Kurdification policies respectively in the pre- and post-2003 periods, the demographic and political balance in Kirkuk was tried to be disrupted and the harmonization in the city was damaged by unilateral steps. At this point, it would be appropriate to assert that these damaging policies on Kirkuk are still being implemented or attempted to be implemented. As a matter of fact, the fraud and irregularities in the Iraqi parliamentary elections held on May 12, 2018, and the 28-day “Blue Flag Resistance” organized by the Turkmens in Kirkuk still preserve their freshness. For this resistance by the Turkmens was a turning point for the elections of May 12, 2018, and had an impact in the whole country. Although no major changes were made in the election results with the political balance being taken into account, the importance of Kirkuk for the Iraqi political scene reappeared due to these events. Considering the effect of the incidents in Kirkuk especially after 2003, the importance of Kirkuk is more and more understood in terms of Iraq's stability. For Kirkuk is no longer just a matter of Iraq, it has become an issue in which even the UN is involved. At this point, Kirkuk has multiple meanings for Turkey.

While the protection of political and social balance in Kirkuk which is at the center of Turkey’s politics regarding Iraq in terms of its integrity, political unity, and territorial integrity is of great importance, the presence of Turkish identity in Kirkuk and the achievement of the rights of the Turkmen are also so important. In terms of Turkish foreign policy, this policy is too large to be limited to political, security and economic issues. In cooperation and dialogue with the highest decision-making mechanisms and emphasizing the Turkish awareness of her historical, social, political and cultural responsibilities, Turkey's ambassador to Baghdad Fatih Yıldız, one of the ambassadors who know and implement this policy of Turkey best, acted very quickly and visited Kirkuk. With this visit, both Turkey showed that she embraced Kirkuk and the Turkish presence in Kirkuk, and Ambassador Fatih Yıldız, as in his remarks, stated that Turkey would provide any support in terms of stability and peace of Iraq due to the importance of Kirkuk for Iraq.

It has been seen in the historical process that unilateral policies in Kirkuk do not yield any results. Instead, a solution based on equal sharing of government that would enhance harmony and common life in Kirkuk will not only solve the problems in Kirkuk but also constitute a significant example for Iraq. It would not be wrong to say that Turkey would be the biggest supporter of this process. Turkey is aware of the fact that Iraq's stability is quite important for the stability of the region and of Turkey. Hence, it is clear that Turkey will back up all kinds of projects that will lead to stability in Iraq in the future just like in the past.